Decades of experience in experimental aircraft fabrication, telemetry systems design and air-racing has taught us that there is always room to make things better, faster, safer and more reliable—and that’s what 51 Aero is all about.

Specifically tailored to meet the unique needs of the warbird community and experimental aircraft crowd, our custom telemetry systems and flight data recorders diagnose problems quickly and accurately to measure and improve performance, analyze critical safety data, and predict maintenance issues before they become dangerous. In other words, our mission is to keep our eyes on your aircraft, so you can keep your eyes on the sky. 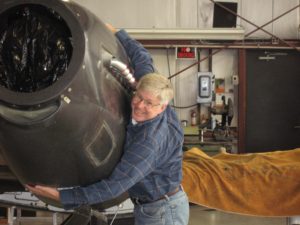 A few years ago, our founder, Fred Roscher, was flying his Miss Picabo, Thunder Mustang over Spanish Springs, Nevada on route to an air race when all the sudden, the engine failed. A small strip of desert highway was his only chance at an emergency landing, so Fred made the split decision to go for it. But, the second he touched down, his craft collided with a moving pickup truck at over 110 mph. Fred recalls that time seemed to slow down in the instant before impact. He remembers locking eyes with the truck driver before his craft went spinning out of control in what was sure to be his last moment on Earth.

Miraculously, Fred and his co-pilot managed to climb out of the cockpit just minutes before his home-built Thunder Mustang burst into flames on the debris-littered highway. Somehow, everybody involved managed to walk away without injury, but his brush with death and the loss of his aircraft—13 years of work!—inspired him to direct his talents toward making sure that no pilot he worked with would ever have to go through the same thing.

Only a few pilots on the planet have experienced the eye-opening feeling of walking away from a crash. But Fred hasn’t lost his love for flying. If anything, the experience has made him cherish it even more. But it has also instilled in him a deep sense of dedication to his mission of making flying safer for everyone who takes to the skies.

With degrees in Electrical Engineering and Computer Science, and over 25 years of active pilot experience, Fred anchors a passionate team of dedicated, seasoned flyers, builders and technology specialists who are just as crazy about flying as you are.

The 51 Aero team has logged over 5000 hours of flight data and worked with some of the top names in the game, include championship Reno Air Racer Rare Bear, world record-setting Thunder Mustang Blue Thunder II and SoCal CAF’s P-51 Mustang Man-O-War, among many others.

We know custom aircraft inside and out because we’ve dedicated our lives to it. To us, there’s nothing more exciting than watching our clients climb higher and fly faster, while giving them the tools to do it all in a safer, more reliable way. To put it simply, we love everything about flying, and our passion is infectious.